Singapore, January 12, 2021 — Scalable smart contract platform TomoChain has released details of its forthcoming Zorro upgrade. Set to occur at block 30,915,660, on or around January 22nd, the activation of Zorro will enhance the Proof-of-Stake blockchain with an upgraded EVM.

“The arrival of Zorro is an important milestone in our ongoing development,” said TomoChain founder and CEO Long Vuong. “I am confident that the new features and functionalities it provides will be welcomed by the community, as we seek to make 2021 TomoChain’s best year yet.” 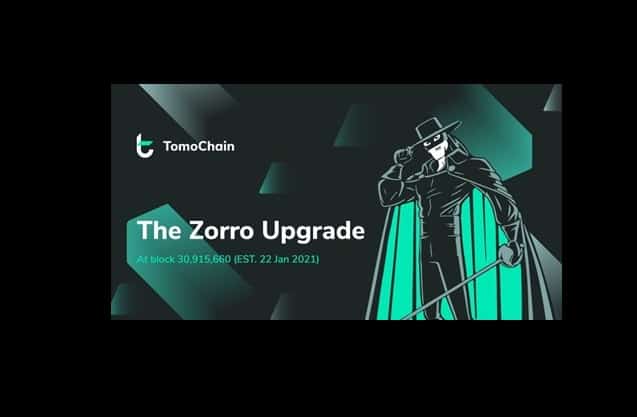 Kyn Chaturvedi, CBDO of TomoChain, added: “This upgrade will elevate TomoChain’s capabilities, making the network suited to hosting enterprise applications that can operate at scale. Making it easier for developers to build on TomoChain, through upgrading its EVM, is a vital step in realizing this goal.”

The upgrade of TomoChain’s Ethereum Virtual Machine will include the latest version of Solidity and enable developers to easily deploy code from other EVM chains with minimal customization. As a consequence, the multi-chain liquidity protocol LuaSwap will soon launch on TomoChain, with all future upgrades to its smart contracts easy to deploy across EVM-compatible chains.

Zorro also fulfills the technical requirements needed to enable TomoChain’s defi-centric Layer 1 Protocol Trifecta, comprised of TomoZ, TomoX, and TomoP. Moreover, Zorro will adjust the cancellation fee on TomoX, a DEX protocol that allows for the launch of permissionless orderbook-based DEXs with zero gas fees, near instant trades, and a shared liquidity book across all decentralized exchanges. The cancellation fee will now be fixed to 0.001 TOMO for all TOMO pairs. There will be no cancellation fee for non-TOMO trading pairs, irrespective of value placed on the orderbook.

Ahead of the Zorro release, all masternodes and full node operators have been encouraged to update their software as soon as possible, since older TomoChain versions will be rendered incompatible with the rest of the network when the upgrade activates on Jan 22nd, 2021. TOMO token-holders don’t have to do anything.

TomoChain, which acquired Ethereum-based sidechain Lition late last year, recently partnered with Vietnam’s Ministry of Education, who will utilize the blockchain to secure millions of diplomas.

TomoChain is a blockchain protocol project headquartered in Singapore, which launched its mainnet in December 2018. With additional offices in Vietnam and Japan, TomoChain is strongly positioned to capitalize on the South-East Asian blockchain market. The TomoChain network features an array of original features and protocols designed to support speed, privacy, usability, and liquidity.