The cryptocurrency market capitalization has exploded above $1 trillion as Bitcoin surged to $38,000 following a recent pro-BTC action taken by Tesla’s Elon Musk.

The alternative coins joined the ride as well, including Ethereum touching $1,400 and XRP surging above $0.28.

CryptoPotato reported earlier that the primary cryptocurrency was struggling with maintaining its price above $32,000. While the bears were looming in, a compelling development took place that changed the asset’s price movements rather vigorously.

The CEO of Tesla and SpaceX, Elon Musk, updated his Twitter bio profile and put only one word in it – Bitcoin. Whether that was the sole reason or not, it’s still unclear, but the cryptocurrency reacted with a massive price surge. 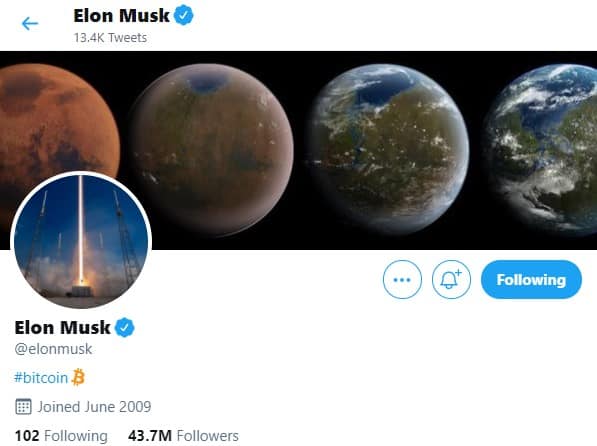 Following this impressive 20% surge, bitcoin has lost some steam and currently trades at $36,500.

Additionally, BTC managed to increase some of its recently lost dominance to nearly 65%. Just a few days ago, the metric had fallen below 63%.

Most alternative coins seemed relatively stagnant on a 24-hour scale before the aforementioned price development. However, they followed their leader as well with impressive gains.

ETH had issues with maintaining above $1,300, but it skyrocketed to $1,400 in minutes as well. Nevertheless, ETH has calmed slightly and currently stands at $1,370.

It’s worth noting that these volatile movements have led to nearly $700 billion in liquidations in the past four hours alone, according to info from Bybt.

Ultimately, the cumulative market capitalization of all cryptocurrency assets exploded to $1.05 trillion. This is an increase of nearly $200 billion since yesterday’s low.